Finding the One
Nick proposed to Ann on the couple’s one-year anniversary of dating. He led her to believe they were going to dinner to celebrate. However, when she arrived at his downtown Little Rock condo, he asked her to join him on the rooftop for a drink. Once there, he popped the question. A number of their friends were waiting anxiously in the room across the hallway, ready to toast the bride- and groom-to-be.
…

END_OF_DOCUMENT_TOKEN_TO_BE_REPLACED 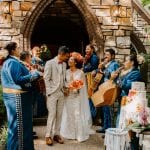